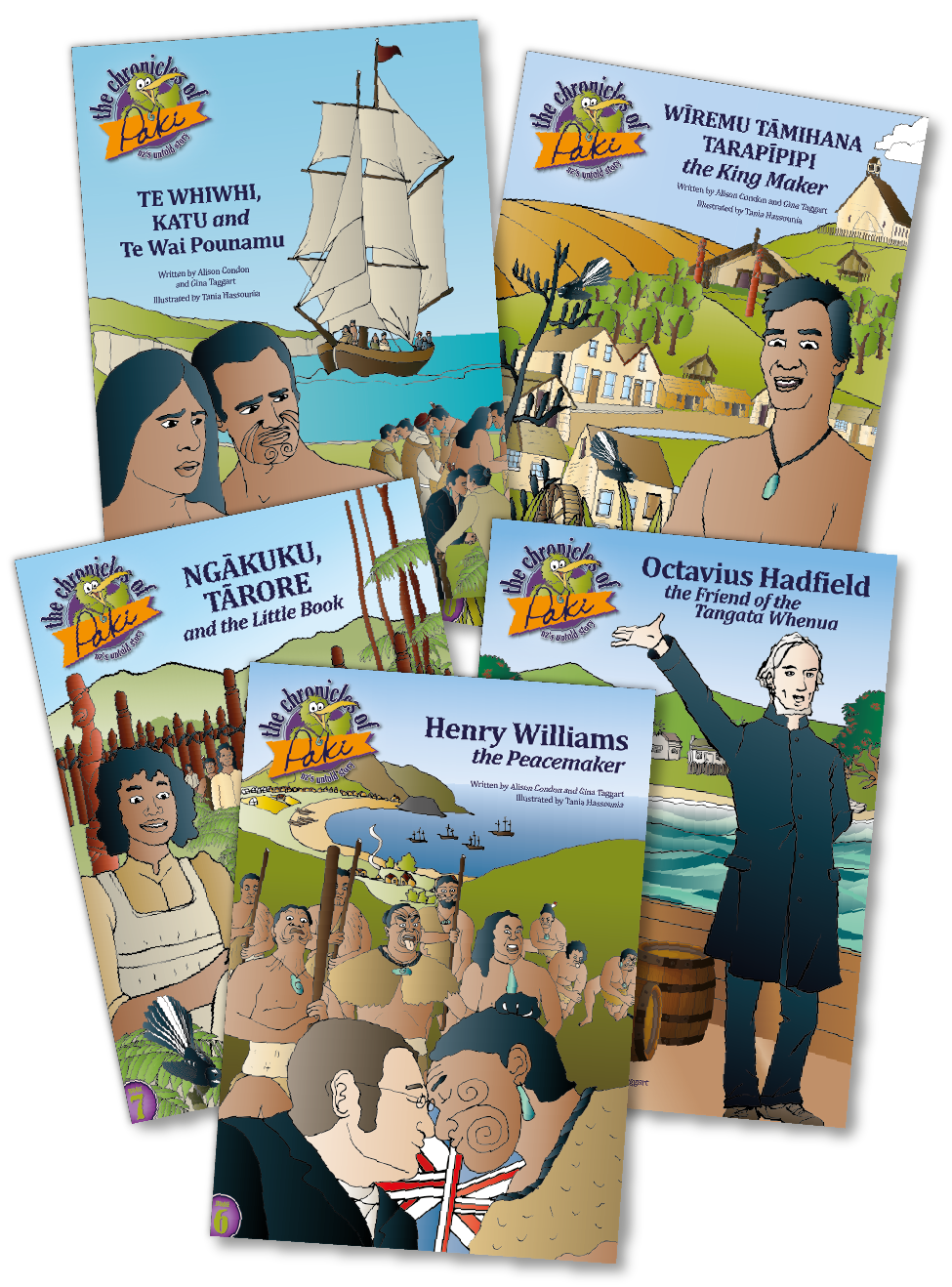 How much do you know about our nation’s bicultural heritage? Most New Zealanders are unaware that there are many positive stories in our early history. However, this awareness is important – because we learn a lot about who we are from our history.

A second series of the  ‘Chronicles of Paki’ illustrated stories has just been released. It is a new and unique resource for all in New Zealand who value our history, and who would like our young people to know stories of people they can be proud of and who lived by values that we would want them to imitate today.  In New Zealand we have many such heroes – and from amongst both Maori and Pakeha in the early years. It’s just that their stories have not been widely told – until now!

What stories are in the second series?

[Story 1] Do you know about the missionary Henry williams, who walked upright across Maori battle fields on which muskets were being fired, telling those involved to put their weapons down, because revenge isn’t God’s way.

[Story 2] Do you know about Ngakuku, who’s daughter Tarore was kileed by an enemy tribe – but who then forgave the murderers, stopping the culture of revenge that had existed between them?

[Story 3]   For example, Do you know about Katu and Te Whiwhi who became convinced of the gospel at Otaki, and then wen to make peace with Maori in the South Island who they had previously attacked, , because that was what Jesus would do.

[Story 4] Do you know about Octavious Hadfield, who stood for Maori during the land wars – so much so that some tried to have him accused of treason, a crime punishable by death.

[Story 5] Do you know about Wiremu Tamihana Tarapiipipi – the king maker, a Maori chief who lived by Christian values? He was drawn into war with colonial troops when their undefended women and children were killed. Then his lands were confiscated because he fought back –yet he still forgave the attackers and led his people to obey both the laws of man and God.

How is this resource helping churches?

Firstly, many church people have felt embarrassed about our Christian heritage because they have wrongly been led to believe that all the missionaries failed our nation.  Many of our early missionaries were men and women well-before their time, holding a range of views that most would agree with today. It is now becoming apparent that they may have been mis-represented by some who had a different religious view, and who had read that view back across our history – using it to filter what they did and didn’t allow to be told, and how it was told. Today there are a growing number of Maori leaders and NZ historian see this, and who are willing to talk about it – as evidenced by the wide range of references and contributors involved in these stories. (Note, all of these stories are both Iwi/descendant checked and historian checked).

Secondly, the stories are impacting the views of many Maori toward Christianity – and this is positive for the NZ Church. For example, we heard a story of a church that had no Maori in its congregation, that was next-door to a school with a very high percentage of Maori in it. Without doing anything different a number of Maori joined their church over the past year. When asked why this might have happened they identified two things.  Firstly, the Hope Project booklets – which were distributed to letter boxes nationally and have told some similar stories from our history, and secondly these ‘Chronicles of Paki’ stories, which they had gifted to the school next door, and can only presume are being read.

Summary: The Chronicles of Paki is New Zealands’ first ever, fully illustrated story series about these stories. Suiting adults, children and grandchildren the stories give us heroes to be proud of. We need this!