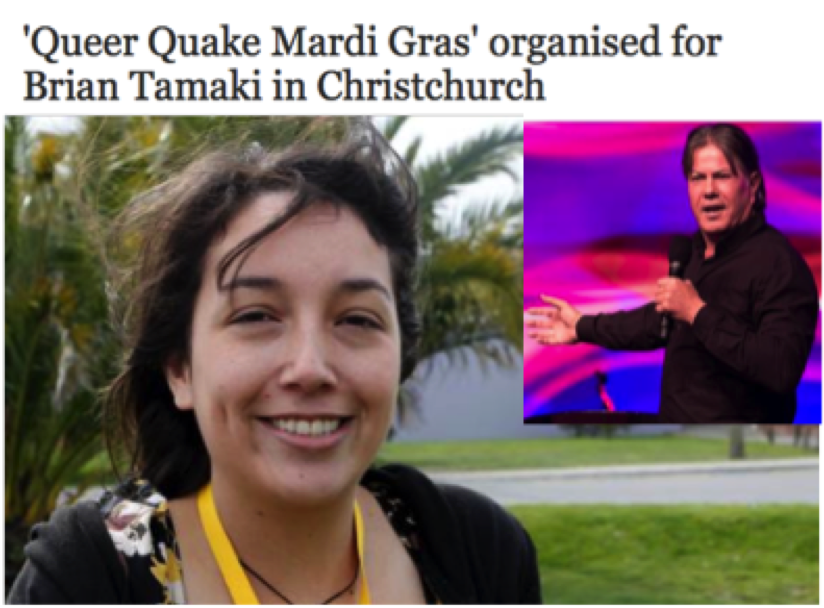 A friend emailed me today about a news article. A protest was organised by a student against Ps Tamaki on a recent visit to Christchurch, because of very unwise (crazy?) words Tamaki spoke about the Christchurch earthquake being God’s punishment for homosexual activity.

And look in the pictures to see at how this plays out in the media.

My friend comments how ‘the LGBT also have plausible-looking cheer-leader for the cause, who is probably not even Gay’, while Tamaki is shown as arrogant and condemning.

My friends view is this: While this is not specifically an attack on the Church (it is an attack on Tamaki) – “The battle against the Church is `hotting up’ … Watch out for Court cases and a hardening of attitudes towards the Church.”

Subtle persecution against Christians is increasing in the West – even though the words ‘justice’ and ‘activism’ are ironically ‘Christian’ words (these concepts only exist within our culture only because of Christian value and belief system) [In case you need that explaining: see footnote]

My friend then referred to what we have been trying to communicate to churches around NZ this year: What goes on in media is a conversation like any other – and people skills are needed (it’s just that they are sometimes called ‘branding’ – but it is the same thing!)… …and it is a conversation to engage.

I so fully agree! Where does truth come from within our society? Here is is: Profile given to things through media, over time, affect perspective. And that perspective is what defines the future truths of our nation.

There is no way around the fact that moral values – and many other things, are now ‘fluid’ A great many people only really think what they are led to think through media and marketing. The way messages are portrayed affects perspectives, and many do not even comprehend the philosophical (religious) implications, logic or lack-there-of.

But we can engage this conversation!  This cultural dynamic is a ‘tool’ to be utilised – like any other. This can either work for the Church – or against it!

The irony is that no greater gathering for good exists than the Christian Church! Our freedoms of speech and religion, the equality of the races and genders, and a myriad of other good and great things within our society (and planet) are all here only because of Christianity, and the activism of previous generations. But the playing-field has changed – and we need to adapt.

Negative media coverage will understandably exist in response to comments like those of Ps Tamaki, portraying us as bigoted, judgemental nut cases etc. And this makes our job in sharing about the great hope we believe to exist even harder.

We need additional credible voices in the public square – and this is where efforts like the Hope Project come in. This can maintain a more balanced perspective (‘truth’) within the thinking of our nation.

Consider this as a thought: What is happening is that we finally need to use our own voices in the public square, rather than assuming that public media will do us for it. Ironic isn’t it?! Until recently, public media gave air-time to Christianity at times like Christmas and Easter. This has now changed. But we do have the capacity to respond if we can be united in our seeing of this need.

That is what we are advocating for!

We need articles like the above one replaced with Christians championing the battle against human trafficking / modern slavery and the child sex trade.

And we need to be hearing about who we are as a nation. Why do we believe in an ‘absolute’ concept of right and wrong, off which we derive our belief in justice – which is what ‘activism’ is all about defending?

Why do we believe human lives matter – causing us to see suicide as a bad thing, and seek to protect the lives of the vulnerable and weak?

Why do we care for our poor, and even educate them (because this is a surprisingly rare way of thinking globally, when looking across cultures at the span of history)?

And while efforts like the Hope Project can do the above, a second of the three proposed media efforts could address matters relating to family and parenting. The needs in this area nationally are MASSIVE – and we, the Church, have a body of a few hundred thousand people who are well-resourced through ministries like Focus on the Family, the Parenting Place, Alpha, CAP and others to help families (and giving profile to this, so we can help even more families, would be wise – on many fronts!).

There is a conversation to engage here – and in the manner with which the conversation takes place. But we need to engage while we can – and that is now, because times are changing!

[FOOTNOTE: Activism assumes this thing we call  ‘justice’, which assumes that an actual moral good exist. However, if morality is ‘relative’ – like it is now considered to be in our society, then all activism really is is the prejudicial forcing of one subgroups chosen morality upon another. No one is actually right – because morality is relative / there is no fixed moral code. Hence the idea of activism actually loses all real meaning, and the idea actually can become dangerous, because it could end up not not too different to tyranny.  In application: This is the reason why many now consider the freedoms of speech and religion to be under threat in the West].