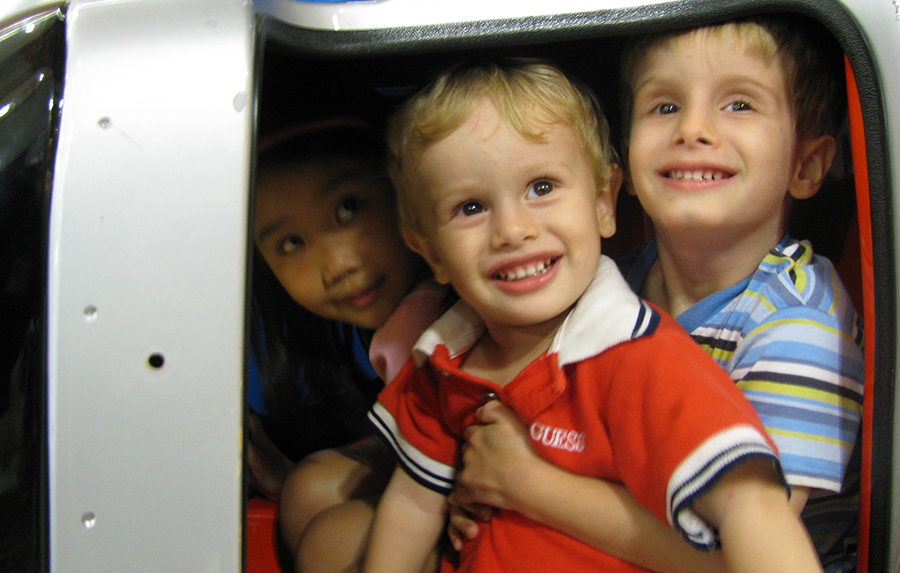 (Pic: Jon, Ethan and friend Janelle – in a ‘playground’ helicopter)

After about eight and a half years in Singapore, today we return to NZ for a new chapter in our lives. As I awake (miraculously before the boys) I have two thoughts.

Firstly, I had a rough patch a few years back, from which the impetus for the book ‘That Leaders Might Last’ came. At that point in time I felt many times like giving up in ministry. I reflect that if I had, because I was struggling so much in Christian ministry at that time I would have left with a kind of anxiety about ever returning to the same kind of work. Because we chose to follow what we believed to be the leading of God to continue in pastoral ministry where we were, I now leave feeling a whole lot better emotionally. While we now move to an outreach focused Christian ministry, were we one day to return to pastoral Christian ministry again I would have no major issue with this.

The second reflection is that I move with great hope in my heart. While a ‘call from God’ is very difficult to explain to someone with no personal experience of faith and God, it can be a very real thing. As a part of the journey toward making the decision to move to this new work, and back to New Zealand to establish a home base in a part of the country we have not yet lived in, we felt a number of impressions from God when spending time reading the Bible or in prayer. I have always been a person to have large visions, desiring to encourage a great many people to consider faith in God (ultimately because of the deep impact of my faith experience in my own life. but also because I believe this to be the logical end of any well reasoned search for origins and meaning and significance in this life. The world around us points us toward faith reflection, and given what it at stake it is a truly important, though oft neglected, matter). I have felt it has been the Lord who has released us to pursue these ‘dreams’ at this time – rather than being me taking an opportunity (for I’ve otherwise turned down good opportunities at various times). As such I believe it may be the Lords intent to give us favour in what we now seek to attempt where that level of favour was not present earlier. Only time will tell.

I also have felt an impression that the Lord is going to raise up a team / give us necessary contacts and favour for what we are going to do in a remarkably short time. Such teams can take a number of years to establish, and only through intentional and consistent leadership toward a worth while vision. However, I believe the Lord is going to somehow do that differently this time. The team is going to come together very quickly when needed. More than being just wishful thinking I believe this is something God is going to work.

So – the children are getting up (and its all of 7am). The house is basically cleaned, bags packed, and remaining food laid out for us to feast on through the day (the rest being given away already). Its time now to work out how to entertain the kids for a day without them unpacking our bags ;-), and to enjoy a slower paced day too. Tonight, off to the airport to say a final farewell to many friends in this season of life, and to fly to a new season – with hope 🙂