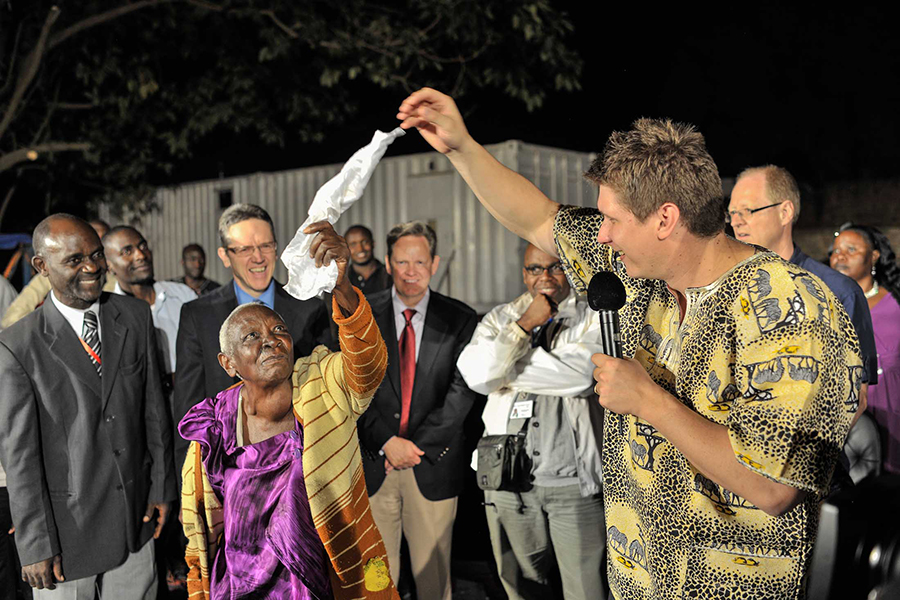 That impossibilities do not exist is one of the core values of this ministry. What this means is that the projects that this ministry undertakes will not be determined by what has or has not been done already, or what is considered possible or not.

The above is a picture of a blind woman who had just received her sight. I suggest to you that this is, in no way, the greatest of miracles.

In Matthew 19 there is a remarkable story of Jesus’ encounter with a rich young man. This young man’s good deeds out-stripped those of most. His observance of religious laws was par-excellence – but there was pride in him. Having asked what more he needed to do to enter the Kingdom of Heaven Jesus addressed the root issue of his heart. Jesus told him he needed to give away all his wealth. The young man went away sad, and it was thus shown that his first devotion was actually to himself – his wealth, his pride, his wellbeing and his security.

The staggering implication of this account, and one for which Jesus gave no mitigation, was that this young man would perish in eternity because of his unwillingness to give away all his possessions at God’s command. Todays ‘salvation-secure’ and yet half-hearted Christianity stands on shaky ground indeed!

The disciples reeled with disbelief at this conversation which they had just heard – how could anyone be saved if God’s standards and expectations were so high? Jesus’ answer was the famous verse we now love to quote in all manner of other contexts: “With man this is impossible, but with God all things are possible” (Matthew 19:26). Look again at that context!

It is true – similar words were expressed by Jesus in another context. When being questioned as to whether he could heal a particular boy who experienced demonic bondage He replied, “Everything is possible for him who believes” (Mark 9:23).

But it is staggeringly interesting – and significant – to note that the context of this famous verse was the salvation of those whom we would consider it impossible to ever be ‘saved’ (aka for the proudest people we know to humble themselves before God, and to submit to and follow His ways rather than their own ways or ideas).

The salvation of ‘lost’ people is possible – and that includes every individual in every race, every language, and every tribe. And whatever resources or miracles are needed along the journey toward this are, in comparison, immaterial.

I recall seeing a man who had been unable to walk standing to his feet and walking after having spent nine years in bed. I recall living with no income for seven years, and not speaking of this need unless asked, and yet all my needs were met, including a number of the ministries needs. I recall trying to buy a house when I had no income. My financial situation was not looking good to the bank manager, so I explained to her the worst case scenario – that I lose my unpaying job and go on the unemployment benefit (the irony being that I would have taken a good pay rise). I remember that moment when she shrugged her shoulders, smiled and said ‘Oh, alright then.’ I recall a very bad health prognosis a family member had, which was as bad as it could be. Believers rallied together in prayer, and the person concerned came through, against expectation, to be perfectly fine. I recall taking on an outreach project in my early twenties for which the budget was significantly larger than any that I had ever heard of being done before in that place – and all the needs were met. While I have not headed up projects as large as those I would like to attempt in the coming years, the principles are the same.

God is motivated by love, and also moved by our faith – though this isn’t a recipe to get anything we want. There is the question of motive, and also of our willing surrender to God’s leading, for His ways are higher than ours. He is, to our initial disappointment, more interested in us (including our growth character) than what we can accomplish for Him. While having received many answers to prayer, I have likewise not received a number things I have prayed and believed for. These have been painful experiences (which I’m sure many can relate to), and yet the conclusion is always the same – I am faced with the question of whether I will choose to trust God or not, irrespective of what I see.

Having said this, He does still own the ‘cattle on a thousand hills’, and so – faced with both our good and ‘bad’ experiences – we must make the choice to either believe He is true to His word, or not to. He can move in ways we cannot see or understand to release financial resources to the things He desires to see funded. God does move in response to the sincere, believing and persevering prayers of His people. God wants to see the ‘lost’ saved, and toward this end nothing is truly impossible (just as He said in Matthew 19:26), but this is so long as we walk with Him in the difficult combination of humility, surrendered faith, and prayer.

What is God’s will, and what do we have the faith for?

We, as Christians, are supposed to be the people of the Spirit. God can make His will known to us.

The greatest miracle is not the healing of a sick body, or the providing of millions of dollars for a thing. It is the humble repentance of a proud and hardened human heart. (I.e., it is easier to raise a million dollars than to convince a proud man to surrender his heart in faith to a God he cannot see). But God can bring about such miracles!