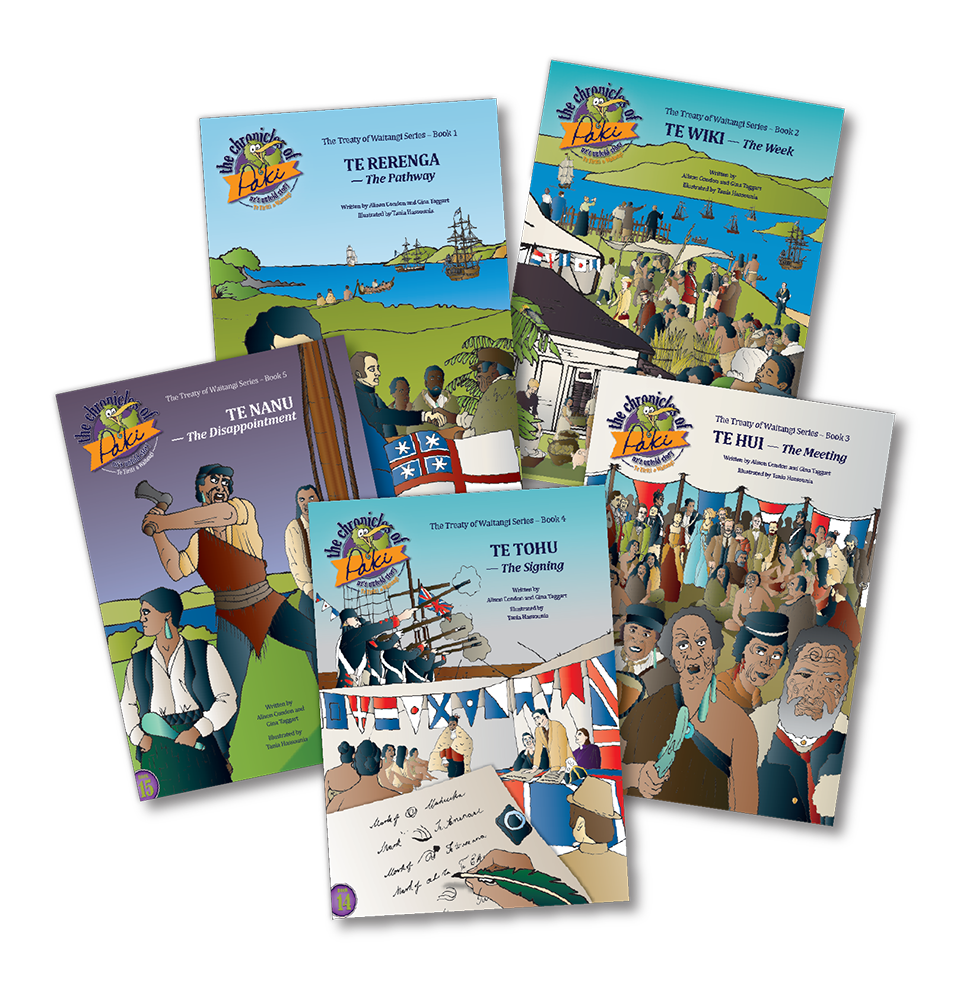 24 Jan, 2017 New illustrated ‘Treaty of Waitangi’ series to be launched

The ‘Chronicles of Paki’ is an illustrated history series produced by Dave Mann, written by Gina Taggart and Alison Condon, and illustrated by Tania Hassounia, with occasional help from Eddie Booth. Many will be aware of it.

It is with some excitement that we announce the launch of the third series, with five stories on the “Treaty of Waitangi” this coming Waitangi weekend.  This series was a big undertaking, and the hardest thus far. The rhetoric of the Treaty has been examined with a very fine ‘tooth comb’ over recent decades. However, the solution was simple. To write this series, the team needed very big ears, with a willingness to listen, learn and adapt. The end-product is a history series that we hope will end up being used in every NZ school.

Some of the endorsements the series has received thus far reflect the quality of the work of the writers and artist. I’ve included a few endorsements below – worth reading.

For Christians, these stories (stories 11-15 in our series) represent a continuation of he little-known early history of our nation. One of our hopes in producing these stories has been that NZ Christians would begin to appreciate a little more of their own cultural heritage, and the amazing influence the Christian faith has had upon our nation and its values. It is noteworthy that these stories are NOT Christian stories – they are historical. However, they reveal something of the very strong Christian influence in our nation’s early bicultural-history.  This is something to know, appreciate and talk about. (May those who have ears hear!)

Appendix 1. Find out more at www.bigbook.nz (and get some sets!)

Learning about the Treaty will never be easier than through a series of 5 concise cartoon stories that reveal a breadth of perspective through some very carefully considered words. Why not support the project  – while blessing yourself and your church?

I was born and raised here in Waitangi, my ancestors signed the Treaty. One of my passions is sharing our local perspectives on history. The Chronicles of Paki Treaty of Waitangi series has my full blessing. It is a perfect time to release this story into the mainstream. The knowledge within it has power that I sincerely believe will help heal hearts, enlighten minds and bring about an everlasting spirit of kotahitanga [oneness].  The Waitangi Marae Chairman, Ngāti Kawa Taituha

I really enjoyed reading this book, especially with the green kiwi giving bits of information. I got to understand more about how the Māori people were treated before the Treaty.  Theresa Currie, aged 12

This series is an animated presentation of events leading up to the signing of the Treaty of Waitangi, the various personalities involved and of events beyond the signing. It gives the reader a glimpse into the rich history upon which our nation is built. It whets the appetite for those who would like to learn more about the effects of the Treaty, and of the place that it has in modern New Zealand society. Pita Parone, Chairman of the Waitangi National Trust

This illustrated Waitangi series for children represents the different characters well. These stories are a taonga. I encourage every parent and teacher to tell them to their children, so we can understand our past, and forge our future together. Peeni Henare (Ngāti Hine, Ngāpuhi) MP for Tāmaki Makaurau

This story was really cool. It gives lots of detail about what was happening at the time that we don’t usually hear. I didn’t realise that Māori and Pākehā didn’t understand each other. I felt a bit like I was there. It was really interesting. Raymond Davis, aged 12

I am very pleased to endorse The Chronicles of Paki Treaty of Waitangi Series. I thoroughly enjoyed reading it. It is an excellent piece of work and I am proud to be associated with its publication. The Rt Rev’d Te Kitohi Pikaahu, Bishop of Tai Tokerau

The book was fun to read. I found myself lost in the story. I learned how the Māori and Pākehā had different ideas about things and it got me thinking about how important it was to translate the languages perfectly. Alyssa Gibson, aged 9

The Paki series brings our early history to life in an accessible and engaging way. They are stories that deserve to be widely read by Kiwi kids. Samuel Carpenter, historian, and trustee Karuwha Trust

I really like the Paki books. They’re a fun and interesting way to find out about our history. Claudia Begovich, aged 10

This resource is a fresh and creative way to engage students with the history of New Zealand. As a series, it covers many aspects of our country’s history and is an engaging documentation and historical commentary that all schools should have. Lisa Parish, Primary School Principal