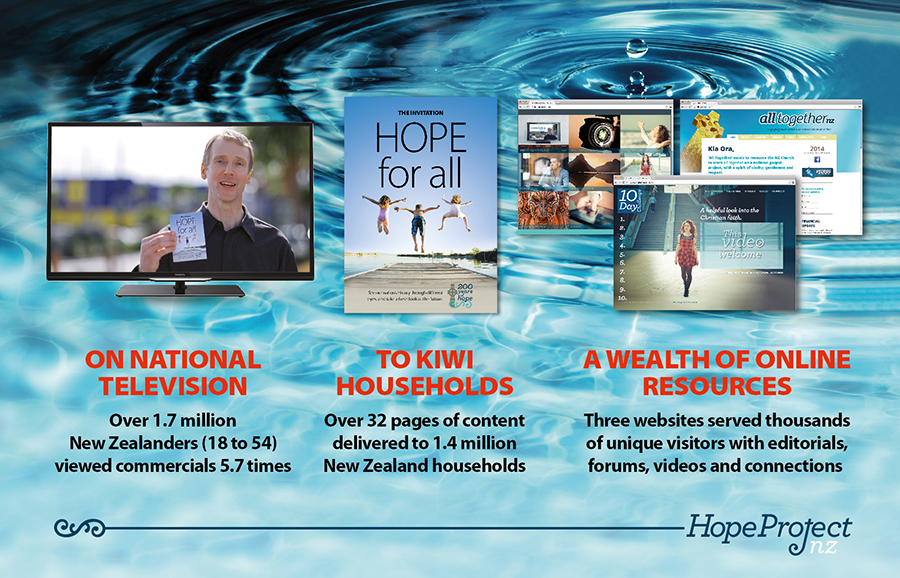 After the most hectic year of my life the first phase has been achieved, and my mind has space to reflect on things other than only ‘core business’ – like blogs.

For me, a big thank you… …is the first thing that needs communicating. This project was considered impossible by many. An attempt of a similar media project fell over several years ago because, while the funds were potentially covered for that one, getting broad partnership so that people at the grassroots would be prepared to engage the conversations was found to be extremely difficult. What point is there is spending money to communicate a message broadly if the ‘sales reps’ on the ground are not ready to engage the conversation? While there is still some reason, it was this lack of willing partnership that resulted in the effort being cancelled. The greatest challenge of this project has never been finance – it has always been vision and belief.

For those who were involved in pulling this together there is now a sense of relief. Many would not support something they could not see and touch. Many churches watched, as did many possible funders, because they had no basis off which to work out if they could trust this. This meant that a small group had to sacrifice extensively to enable this. Finally the first project has happened and what this is all about can be seen.

How did it go?

The most important measurable is lives:

In terms of other things we can measure at this point:

The budget was $1.3m. We have run the project significantly UNDER budget, providing healthy cash flow for the second phase.

We could have built a small church building or a new church foyer with the same amount – but instead we helped the Christian message be heard in hundreds of thousands of homes from Kaitaia to Bluff. With a limited budget, much was accomplished – the full fruit of which we may never know in this life.

As the Apostle Paul said in Romans 10, ‘How will they know unless someone tells them?’ The Christian Church has the greatest message of hope on earth in its hands. Its a message that has revolutionised the western world – opening the way for scientific endeavour, for respect for life, for kindness instead of only ‘self-advancement’ or ‘survival of the strongest’, for belief in the equality of all people, for education for all, for generosity toward the poor, to healthcare freely given – and much more. The message just broke out of the 4 walls of many churches. This is something to rejoice at!

Our hope, as expressed at AllTogether.co.nz at the moment, is to do Phase II next April, and Phase III at Easter 2016. These remaining two efforts would complete the original vision of providing a short series of conversation starters, with good content, available for all who are interested – yet not pushed upon any who are not interested.

We thank God for the partners this effort has found with many churches and people throughout this nation, and pray we will be able to continue to work together to see the vision completed.

As an end goal, our hope is that there will be readiness by the conclusion of the third phase for the most important conversation this project could initiate: A conversation about how we could sustainably get the communication of the Christian message out of the ‘too hard basket’ in our churches. How could we get the mission of the Church to truly and recognisably again become the mission of many local churches? This is a most-challenging question, and the greatest possible win of this project – because it is the key that can unlocks the door to help the Christian Church bring about its greatest possible good in society, for the benefit of all.

Thank you to all!