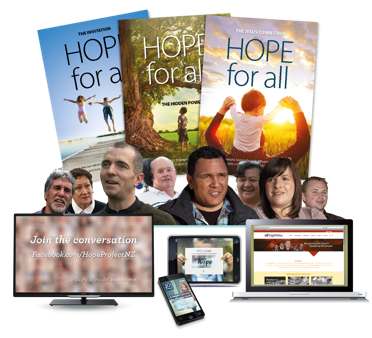 [AN ARTICLE PREPARED FOR A CHRISTIAN PUBLICATION]

The Hope Project was one of the most ambitious gospel efforts our nation had ever seen. Using multi media, it sought to initiate a conversation with secular New Zealanders about Christian faith – while also boldly seeking to rally pastors to equip and mobilise their members with a conversational approach to outreach. With successes on many fronts we now consider what could we learn.

Past disappointments had dowsed the flames of courage for outreach in many people and churches. For 30 years there was no ‘every home gospel project’ in our nation – even though there were no laws against it. Many thought this project would receive truck-loads of hate mail. But with ‘gentleness and respect’ (1 Peter 3:15) as guiding values, along with authenticity, it didn’t!

Many in the church had concluded that New Zealanders were disinterested in spiritual things. However surveys indicate that 46% still believe in a God, with another 31% in a Higher Power. It was discovered by many that most of the objection has to do with the fact that most people don’t believe religious truth exists anymore. You can’t tell the truth to a person who doesn’t believe in it – but you can talk with them about it! Many personally discovered how, when conversations are gentle and respectful, New Zealanders are actually quite comfortable to discuss spiritual things.

There seemed to have been a distinct lack of personal evangelistic activity at a local level in many communities. It was as if the heart for personal ‘evangelism’ to people we don’t know had been lost. Inspired by equipping that was given, and quality booklets that were produced, hundreds of Christians from all over New Zealand contacted us for spare booklets to take to share with others. A staggering 64% of partnering churches said they had members who took booklets to people at the doors of ‘no circulars homes’.

Five years ago the word ‘evangelism’ was negative in its connotations to most churches and Christians. For many who engaged with the Hope Project this has now changed. With focus given to explaining the conversational approach to evangelism, many realized that this gentle and inquisitive approach is not only Biblical (consider how often Jesus asked people questions in conversation) but also entirely appropriate in a multi-religious society. Church by church, and person-by-person, this discovery is bringing new hope.

Statistically about 6 out of 10 people are not aware of having a church-going friend. If ‘relationship evangelism’ meant that we need to have a relationship with a person before discussing spiritual things, many came to understand that this leaves most NZers ‘unreached.’ Increasingly, Christians realised that it is a relational manner that is needed – not a relationship. Put differently, with good people skills trust can be quickly established. This perspective has opened a door to this other ‘unreached’ 60% of the population.

One of the Hope Project teams concise evangelism-training videos for churches was about door-to-door visitation. It felt radical to the team to create a video that endorsed street conversations and door-to-door visitations – because it felt like a message before its time. However, it helped many to realise that these are still perfectly acceptable approaches. What isn’t acceptable, and hasn’t worked, is bad people skills. As a result Christians of all walks are re-engaging in personal outreaching initiatives like in door-to-door visitation – certainly including those who took Hope Projecrt booklets to people at no-circulars homes.

It was widely accepted that ‘evangelism’ was in the ‘too hard basket’ in our nation’s churches and denominations. But the real problem was the deafening silence that existed regarding this. It was as if the situation were somehow acceptable. The Hope Project’s discussions with pastor’s groups raised this issue, and suggested that the main responsibility of the key leader of any organisation is surely to ensure that the mission of the organisation is authentically, measurably and observably the mission of their organisation! This made sense to many, and continues to be a point of reflection for many pastors and church leadership teams. Many are recognizing that the mission of the Church has often been reduced to the status of one of its ministries.

Previously only a few churches had evangelism-training seminars, and these were not often well attended. The Hope Project encouraged that equipping become pulpit-based, with the pastor taking the lead. The results have spoken for themselves.

As New Zealanders became less open to the truth claims of Christianity through the 1960s onwards, many outreaching approaches (and organisations) began to struggle. The only place that seemed to still get results was big-event evangelism. However, a growing number came to question whether the claimed results were real, because few could be found in a church a month or year later. The Hope Project simply proposed what many were already saying; that we need to focus on mobilising our members more than we do on running outreach programs. This represents a significant change in thinking and focus. Within all things evangelistic, nothing is as important, or could produce the same results, as mobilising members. The Hope Project team believe there is reason for great hope for our nations churches if this value continues to be understood and applied.

The most encouraging revelation is that, from Kaitaia to Invercargill, there are pastors and church members for whom evangelism is no longer in the ‘too hard basket’. There is new hope amongst many, and the Hope Project team testify that this is resulting in a willingness to discuss and consider things in a way that was not possible five years ago!

Where to from here?

“I’ve heard the church being called the sleeping giant” says Dave Mann, coordinator of the Hope Project. “We’d like to see it woken, and believe that the key to that is the mobilising of the members as witnesses in everyday life! You see, programs bring addition. Mobilising members is the key to multiplication! The million-dollar question is how we could get this happening, because most churches struggle with this area. And this is the area that we believe we’ve seen significant success in. What the Hope Project has shown us is that a broad change in the ‘evangelistic temperature’ of our nation is possible. This being the case, we can’t see anything better that we could do than to continue to ‘stir this pot’. Mobilising members is the ’holy grail’ of evangelism and, with God’s help, I believe we could see hundreds of churches, and tens of thousands of believers uniting in this focus, waking the ‘sleeping giant’.”